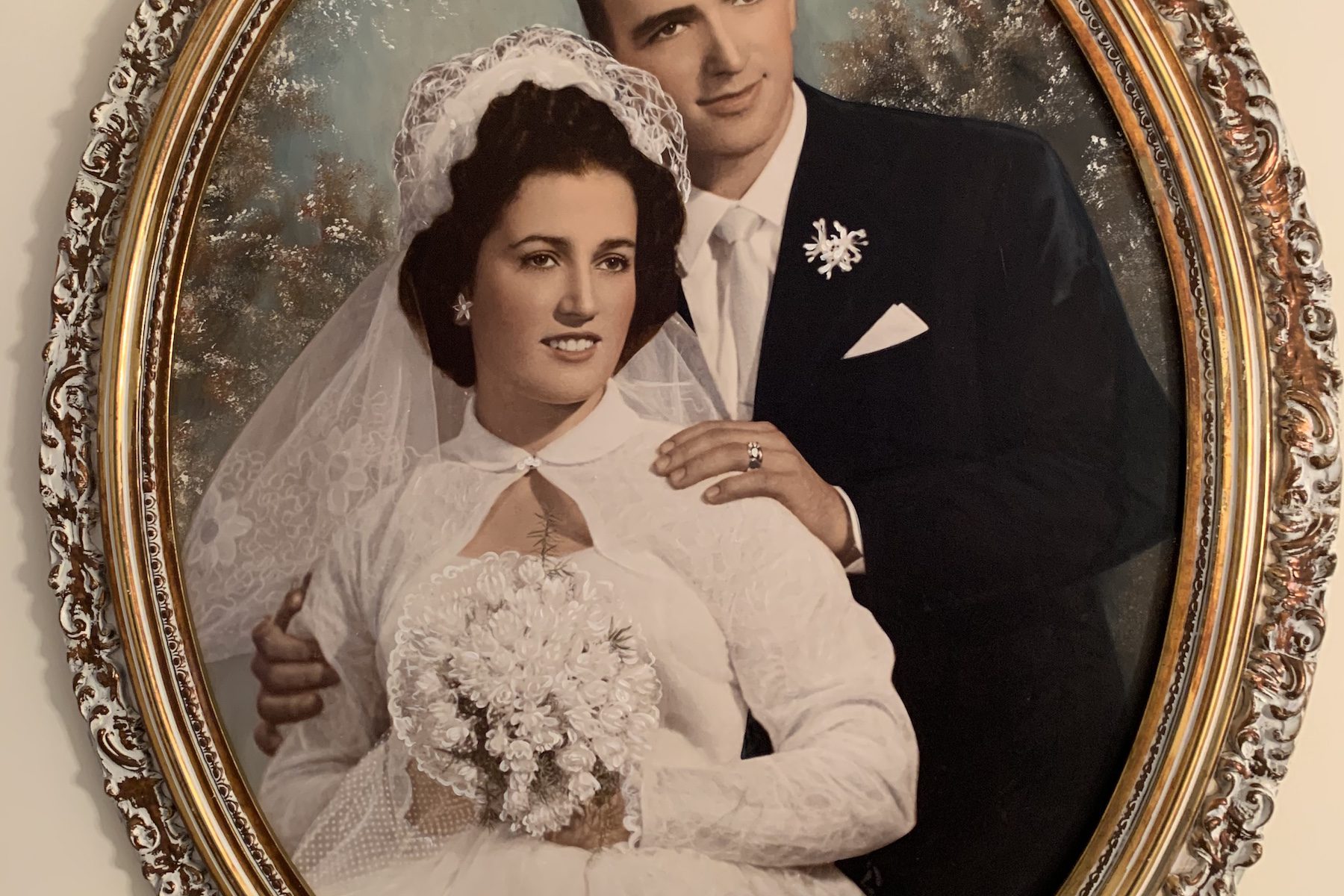 Last week’s installment left off when Angelo’s life was about to change. He had fallen in love, but America was calling. His dream was coming true and he was given the opportunity to head the US and build a new life.

As Angelo sailed away from his home, he began to think. He thought about what he was leaving behind– his family, his friends, his Romana. He was 18 years old, alone, and heading to the unknown. While this might be scary to some people, Angelo turned this fear into determination– something still true of his character today. He was determined to prove himself, to make a life for himself and his future family. He knew he was getting an opportunity that people dreamed about, that he dreamed about, and he was not going to let this opportunity go past him. He got motion sick his first few days at sea, but kept reminding himself that he “was going to America.” After 12 days at sea, he saw the “beautiful, tall, welcoming sight of the Statue of Liberty.” 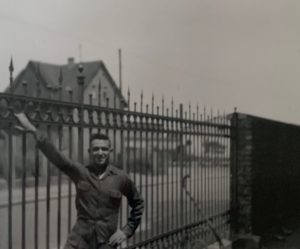 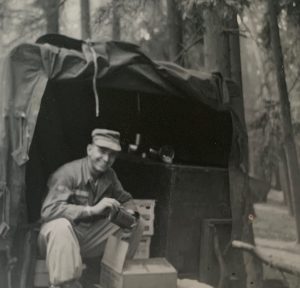 The only personal belongings he had with him was a small hand bag, so he got through immigration rather quickly. He was met by his brother-in-law and uncle who were already in the US. He spent a few days in New York before driving to Chicago. As soon as he got to Chicago, he began to think about work, the reason he came to America. His uncle suggested he take some time to go to school and learn the English language before working. This didn’t fly with Angelo and he insisted on working while attending school, and so he did. He got a job in a factory on Armitage and Cicero earning $1.49 an hour. He also attended classes that taught about American history and the English language. As he began learning more, he was able to get himself a place to live and a better paying job. He was making more money and picked up a second job. After a little while, it was time to report for the draft. 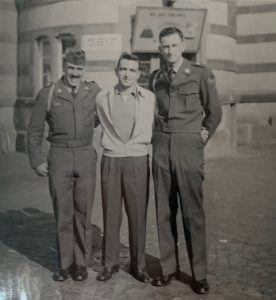 All while in America, he kept thinking about Romana. He wrote her every day beginning the first day he arrived in America. He dreamt about the day he would get to see her again.

He was finally called into service and sent to Camp Chaffee Arkansas where he went through his basic training for the army, which he describes as two extremely challenging months. They then sent him to Fort Dix, New Jersey where he would await his overseas assignment. With the Korean War going on, he anxiously awaited to find out where his assignment would take him. He soon was assigned to a second Armored Division stationed in Worms, Germany right on the Rhine on an army vessel. Being in Germany meant that he was closer to his hometown in Italy and closer to Romana. He found himself thinking about her often and wondering where she was. He wanted to know if she was still waiting for him. 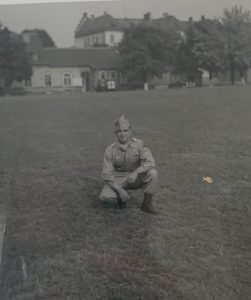 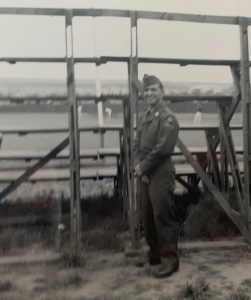 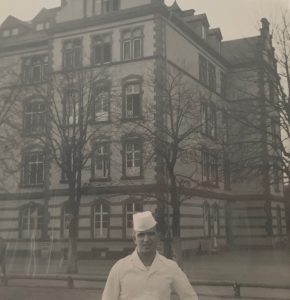 Angelo was on good terms with his supervisor and told him about his situation with the love of his life. He was granted a 10 day leave of absence and took the first train he could from Frankfurt. He had a long journey ahead of him- Frankfurt to Munich to Brennero to Bologna to, finally, Mola and Romana. He was picked up by his brother-in-law and the next day went straight to that familiar street corner to see Romana. He was nervous to see her and asked some friends to help set up a meeting. Angelo needed to see her and see for himself if she still remembered him after many long years. He was so nervous knowing that they would soon be in the same room. When he first saw her, she was no longer a young girl, but a grown, beautiful woman. They saw each other and everything stopped, neither of them able to speak.  They spent time catching up with each other– she told him that she was caring for her mother who had fallen ill and her mother had saldy passed and he told her about his time in America. As they were saying goodbye that evening, Angelo held Romana’s hands, looked into her beautiful eyes, and told her how much he still loved her and that he wanted to marry her.

Angelo set up a plan to go with his older sister (because his mother and father were already in America) to Romana’s family home and ask her family for permission to marry her. Walking into her family’s home a few days later, Angelo felt a sense of warmth. He asked for her hand in marriage and was given the blessing from the family, but there were still logistics to be set. Romana and her family were a little uneasy about having a wedding so close to their mother’s death, but Angelo’s sister explained his busy timeline. She told them that he was only in town for a few days. His plan was to get engaged and come back a month before he would return to the US to get married. He then received the official answer that he had been waiting years for… he and Romana were going to get married!

They spent the rest of his leave together and making plans. They had a dinner with both families where Angelo gave Romana a ring and they went to the cemetery to visit their loved ones that had passed.

A few months later, Angelo returned to Mola and on September 24, 1956, they officially became husband and wife. As Angelo saw Romana enter the church, his eyes filled with joyful tears knowing this woman would soon be his wife. They had a small reception and spent the last few days of his leave honeymooning through Italy. 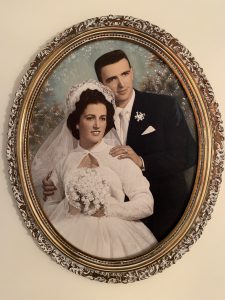 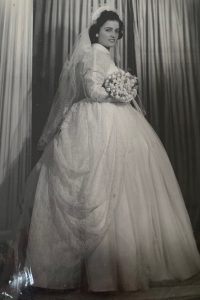 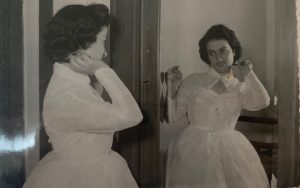 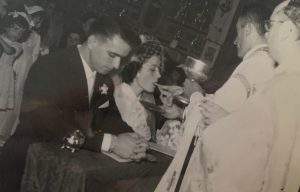 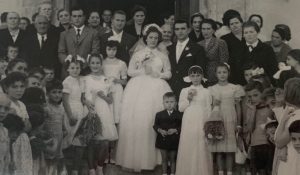 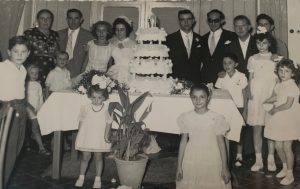 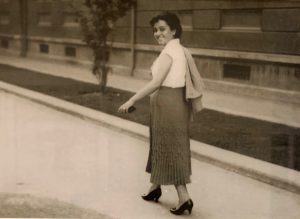 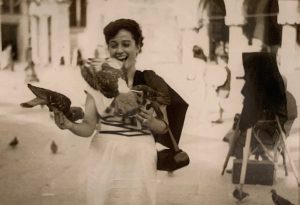 Romana waited in Mola while Angelo completed his service then she would meet him in America. A few weeks after his term was completed, Romana made the journey to America and was greeted by Angelo in New York. They took the next flight to Chicago and spent the plane ride talked and dreamt about their future and their new life in America together. They both knew there would be a lot of hard work and sacrifices that had to be made, but they would enjoy a beautiful life together.

Just like they had thought, they had a lot of work ahead of them. Check back next week for their new life in America and the start of Caputo’s

5 Replies to “The Story of One Emigrant Part III: Life in America”